I had the pleasure of reading the ARC of Breaking Free, a YA/NA contemporary romance by SM KOZ. 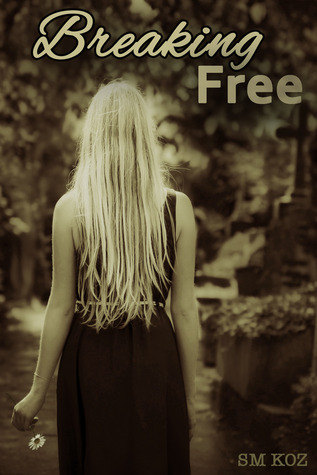 First is my review, then an interview with the author.

This New Adult romance will be released 8-1-14, and the psychological aspects of the story enticed me to read an advanced copy.

Kelsie is a 17-year-old cheerleader who’s a hot mess. Her best friend died in a car accident, and Kelsie unfairly blames herself. To numb her emotional pain, she starts self-injuring. While cutting oneself is horrifying, I didn’t fully appreciate the horror until I was right there with Kelsie, feeling her pain and her disgust from taking it out on her body.

To try to curb her harmful behavior, Kelsie’s father sends her to a wilderness therapy program. She is ill-prepared and ticked off, with her huge suitcase and even bigger attitude. But the counselor Chris knows just how to handle her, and Kelsie settles down enough to get through the first day, eventually growing closer to the other teens in the program.

JC is the young man who captures her attention the most. He’s athletic, light-hearted, and also blames himself for a loved one dying.

Keslie tells her story to the woman hired to keep her safe—Marta—after she finishes the program. Therefore, the novel consists of flashbacks, which might not have been the best choice for the pacing of the plot. I thought the story took a while to get going. Also, the nicknames Kelsie bestows on each program participant seemed to interfere with clarity and my connection to the characters.

But once the plot kicks into gear, I was riveted. Another boy in the program has it out for JC, and a brewing storm threatens the safety of the group. That’s when Kelsie is forced to grow up fast, discovering that people may not be what they seem.

I dislike when parents are portrayed as incompetent twits in YA and NA stories. Though Kelsie’s stepmother is a shrew, I’m glad her father works hard at redeeming himself.

Kelsie’s interactions with JC provide much-needed lightness given the darkness they’ve experienced. The characters seem to be their age, which I appreciate.

I grab a handful of shirts and organize them by type, short-sleeved or long-sleeved, and color. After a few minutes, JC stands behind me and places his hand around my waist. “You really are OCD.”
“Is that a problem for you?”
“Yes, that is the final straw. I can handle everything else, but putting my shirts in rainbow order is too much.”

I loved the ending, which left me with a relieved, buoyant feeling. This is a wonderful debut novel!


And now an interview with SM Koz:

Jennifer Lane (JL): Welcome to the blog, SM! How did you get started as an author?

SM Koz (SK): Thanks for inviting me! Technically, I first started writing about nine years ago. The story was a murder mystery that took place on a cruise ship and one of the main characters had an English bulldog named Penelope. I wrote two pages, realized it was too hard, and then never looked at it again for five years. After my husband and I moved to a sleepy little village, I found myself with a lot of free time. One day while I was cleaning up computer files, I ran across my story with Penelope and was somewhat impressed by what I read. Having lots of time on my hands, I decided to write a full-length YA novel. That one was about a girl who moves to the beach to live with her older sister for the summer and falls in love with a boy as they help a stranded dolphin, named Maurice, recover from a mysterious illness. That one will never be published, but it’s fun to go back and see what my first attempt at a novel was like. Since then, I’ve been writing about one book a year, some fanfiction and some original. Breaking Free is the only one I feel compelled to publish at this time, though.

JL: Blogger Christina Rodriguez recommended I read Breaking Free for the psychological elements, and I’m grateful she did! What inspired the therapy aspect of this story?

SK: I love Christina’s blog! Not many people are aware of this, but she helped me with my translations. As you know, I have a couple Hispanic characters, so I wanted to make sure my rudimentary Spanish made for realistic dialogue. She was a huge help!

As far as the inspiration for the story, I have a friend and a family member who have both cut in the past. When I first learned about self-injury, I didn’t understand why people would purposely hurt themselves and, therefore, I thought it was to attract attention. I ended up spending quite a bit of time researching the topic, which opened my eyes. Most people who cut don’t do it for attention. In fact, like Kelsie in the book, they try to hide what they’re doing. They’re ashamed, but it’s beyond their control as it has become an addictive coping mechanism to try and deal with their overwhelming emotions, whether it’s depression, anxiety, whatever.

After learning so much about self-injury, I wanted to help others who were in my position—wishing to help their friends, but not understanding how to or even why their friends did what they did. That’s when I decided to turn it into a story. Because I typically write adventure-filled books, I knew immediately that the main characters would be in the wilderness for their therapy and run into some unexpected hurdles along the way. I think it ended up being a nice mix of emotion, suspense, and romance with a couple plot twists to keep things interesting.

JL: You’re getting some lovely reviews. What has been your favorite comment about your debut novel?

SK: Thanks. It’s hard to pick just one, but there have been a couple people who have commented on the realistic nature of the story. Furthermore, some of these individuals have indicated they themselves have experience with cutting. Although I did an incredible amount of research for this book, it’s always challenging to write about something that you have no firsthand experience with. So, receiving this type of feedback provides me with a great deal of satisfaction. If people who share similar backgrounds are able to relate and connect to Kelsie, then I hope they’ll find strength in her story and learn better coping methods for their own self-injury behaviors. With Breaking Free, if I prevent or help stop one person from cutting, then I’ll feel like it was a success.

JL: I see on Goodreads that you’re planning a Young Adult novel next. What draws you to YA?

SK: Initially, I thought it would be easier. My story with Penelope was meant for adults, but I felt like my plot wasn’t complex enough for that audience. So, I switched to YA for my next one, but after writing the entire thing, I determined that plot was way too simplistic even for teen readers. That’s when I realized YA isn’t differentiated from adult fiction by complexity or writing quality, it’s about the type of story, the characters, and unique conflicts.

I enjoy slipping into the complex minds of teenage characters. They don’t always do what you’d expect or behave the way you’d like them to, but that’s okay. It’s all about their underlying nature. Everyone makes mistakes as they grow into the person they want to be. I enjoy playing with that because I think it allows for more interesting characterization and a lot of internal conflict as well as external.

Breaking Free is my first book that really focuses on the emotional complexities of the main character as the major plot line, though. I thought I might have a difficult time writing this type of story, but the words flowed relatively easily. In fact, I wrote this three time faster than anything else I’ve written. I’m not sure, but think I might have found my niche 🙂

JL: Thanks for visiting the blog, SM, and best of luck on your writing career!

SK: Thanks so much for having me!
Follow Jennifer Lane Books on WordPress.com