I’ve plodded through my ninth novel for the past 18 months and *finally* finished a few days ago. It’s a sports romance titled Rivals.

When an Ohio State volleyball coach meets a Michigan football coach as they recruit twin star athletes, the hot rivalry begins. How will it end? Find out in early 2021.

Rivals is up at Goodreads.

I have an awesome editor, but my book designer is busy with her day job. I’m searching for a cover designer and formatter who communicates effectively. Who’s your go-to for self-publishing?

My quick response to today’s question: According to the IRS, writing is a HOBBY for me! 😀

On the highway, bad things can happen …
Aimee Jo Elliot isn’t having a good day. Her long anticipated journey to California is cut short when her car is stolen. Stranded at a truck stop in Alabama, with no car, no money, and most of all, no hope, she’s desperate to get back on the road. California holds the answer to her dreams and an escape from the danger she’s left behind in Georgia. Accepting a ride from the sexy truck driver has its own set of risks, but she never considered it would be to her heart.

The life of an asphalt cowboy …

Luke McIntyre has life all figured out. He owns his own rig, makes his own rules, and only answers to himself. The solitude of life on the road suits him just fine. Not one for permanent relationships, he has no problems picking up temporary lovers. And he always makes sure they know the score—hot sex, respect, but no strings. His quiet life is shot to hell, however, when he offers the Georgia beauty a ride. He soon discovers that rules are made to be broken.

In for the long haul …

Luke and Aimee Jo soon realize their simple four-day journey is anything but simple. An instant attraction sidetracks their well-made plans and dreams. When they reach California, decisions must be made. Will they go their separate ways, or journey on together?

Marie Savage is a self-published author who has a love for family, friendships, patriotic spirit, and hometown pride.
Born and raised in the Florida Panhandle, she has always had a love for reading and writing, with the romance genre being her obvious favorite. Her desire to expand her horizons, led her to join the United States Air Force and proudly serve her country for six years.
While stationed in Atwater California, she met her true love and together they have shared life’s beautiful joys and tragic losses. After spending over half her life in the Central Valley of California, she has moved back home to the Wiregrass area, where her passion for writing first began. 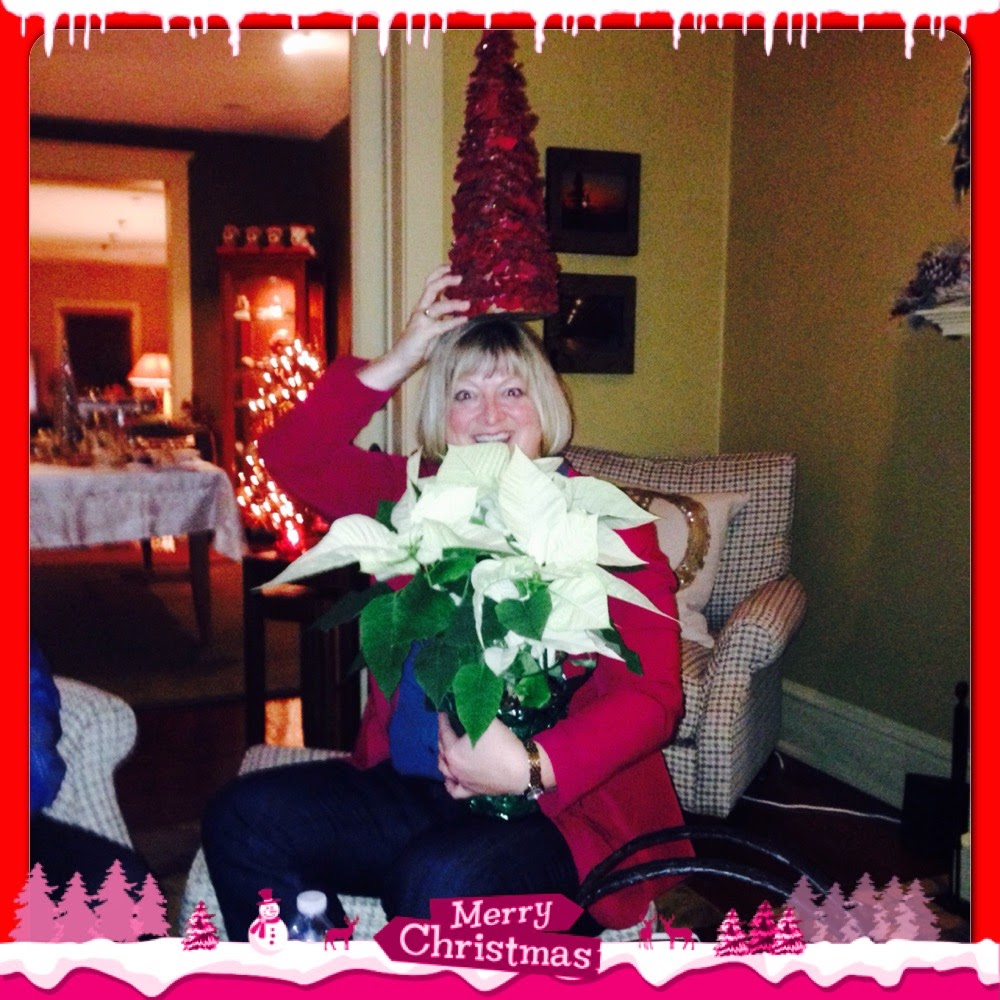 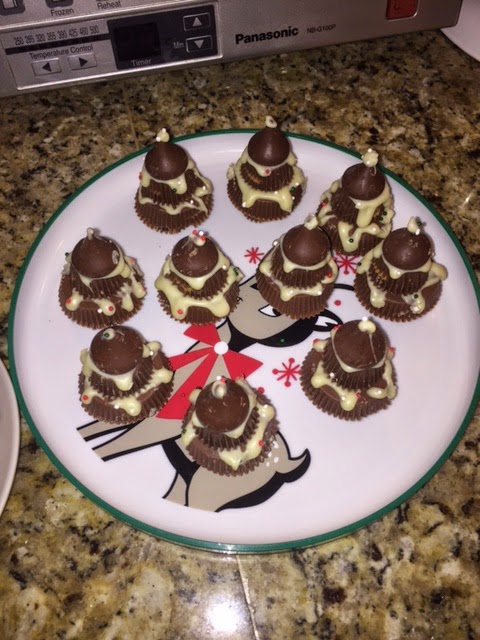 (Some of us had a little too much to drink at a recent holiday party.)
Here are the Peanut Butter Cup Christmas trees I made.
(Using white chocolate “glue”, layer a small pb cup, large pb cup, small pb cup, and a Hershey’s kiss!)

And here’s my friend Jason the Christmas dunce. (Isn’t he cute?)
Jason and another friend gifted me this T-shirt:

Rude! I may be single, but my characters Dane and Lucia from college volleyball romance Blocked might not be single for long. *winks*
Blocked’s sales have been great! Thank you so much, readers. I’m hosting two Blocked giveaways for the holidays, listed below and on the right sidebar:
1) Enter to win a signed print copy on Goodreads HERE (open internationally).
2) Enter to win a $25 gift card and more HERE if you review Blocked on Amazon.
Both giveaways run until early February.
And my critique partner Nicki Elson has an Amazon gift card giveaway until the end of the year HERE.
Happy holidays!
September 16, 2013 jenlanebooks
On Best Behavior releases in one week: September 24, 2013!

Make sure you enter the Goodreads giveaway *points to the right*
My awesome editor Jessica Royer Ocken always helps me tighten the story, which included deleting this scene from the first chapter. Sophie and Grant have stopped by the church to plan their nuptials. I’ll be back with part two of the scene on Friday. Enjoy!

Tom smiled. “You two already act like a married couple, so I’m sure you’ll be just fine. Stop by and talk to Betty on the way out. You can check the calendar for this summer, and schedule our next meeting.”

Ten minutes later they headed out of the church. When they passed by the sanctuary, Sophie halted. “Let’s take a peek.”

Grant followed her into the spacious rectangular hall with vaulted ceilings. Morning light streamed in through the long windows lining the walls, illuminating the beige paint and pine wood accents, lending a surprising brightness on a cloudy winter day. The décor was nowhere near as ornate as that of Grant’s church, but the tasteful restraint still showed off the wealth of the Gold Coast, where her father lived.

Though they were alone, they treaded lightly to one of the pews and slid in, facing the altar.

“So this is where we’ll be on June eighteenth,” Grant whispered, looking all around him.

Sophie nodded, whispering back “Have you ever been in a Methodist church before?”

Grant paused. “I don’t think so, but I’ve been in a non-denominational chapel.”

He looked down. “Gurnee.”

“Oh.” Her right hand slid under his left hand, palm up, intertwining their fingers. She couldn’t imagine living in prison for over two years. One year for her had been awful enough.

He glanced around him. “It’s pretty here. Peaceful.”

“Yes. It’s a very spiritual place here, I think. My favorite part of the service is the moment of silence.”

On cue, Grant fell silent. Sophie also drew quiet, noticing her breathing and the soft tick of a clock behind her in the narthex. She felt warmth in her chest—a wellspring of emotion.

When Grant turned to her and found tears gliding down her cheek, his smile vanished. “This is too hard for you. Let’s get married at the courthouse.”

She gave a quick shake of her head as she sniffed. “No, I want to get married here.” She smiled through her tears. “I’m not crying because of grief. I cry all the time here, even before my mother died. It’s like…it’s like I can feel God’s love pouring into my heart when I’m here.” She aimed a sheepish look in his direction. “I…it’s silly.”

“It’s not silly. You feel things deeply—that’s one thing I love about you.”

“Really?” Somehow he always made her feel better about herself. “I remember the first week of my psychology internship at the VA. I had this older supervisor who was really intimidating. She was the director of the program, and she was quite stern. She was asking me questions about my client, and I didn’t know the answers, and I felt really stupid, and I, I started crying. I was so mortified, but she told me it was a good thing I was so emotional because it would help me do my job better. It would help me be a better therapist.” Sophie smiled. “She was my favorite supervisor after that.”

Sophie turned to him, and her eyes welled up with tears again. Her voice trembled. “The reason I cried during the silence…I was thanking God for bringing you to me. I’ve been waiting a long time for you to come into my life, McSailor.”

He immediately extended his long arms, scooping her into a warm embrace, cradling her against his chest and rubbing soothing circles on her back. “You’re not the only one grateful to God. I’m so thankful we’re together.”

“And that’s why I’m so scared about this FBI thing,” Sophie added. “I’ve found you, and I don’t want to lose you.”

“I feel the same way.” Grant straightened and looked into her eyes. “Listen, I hear your concerns. I do. I just have to pursue this for now. When you come down that aisle on June eighteenth, I want an honorable man waiting for you—not some Mafiosi.”

“But I already have an honorable man.”

He frowned. “I’m sorry, I just don’t feel that way. I don’t know if working with the FBI will change things, but I’m hoping it will.”

She took a deep breath, sensing this was one of those unsolvable problems between them that Hunter had mentioned. It didn’t seem right to argue while sitting in the pew. “Okay, I disagree with you on that…but I’ll try to get on board.”