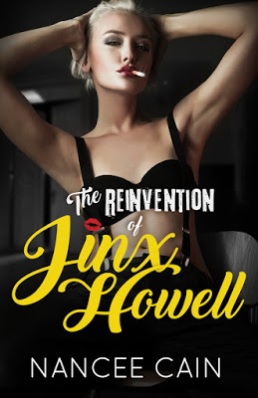 Hiding behind her wigs and heavy makeup, Jinx Howell masks her insecurities—which even she doesn’t understand—with bravado, slashing through life with reckless abandon. Lonely, but unwilling to get close to anyone, she finds the ideal solution: a hook-up with the campus’s most notorious heartbreaker.
In similar fashion, Mark “Two-Time” MacGregor protects his heart and keeps himself unencumbered through a string of one-night stands. A chance meeting with the edgy Jinx in a dark alley seems like destiny. She claims to want sex with no ties, making her perfect. Like attracts like. But this girl with a switchblade has more hang-ups than he does, which is a hell of a lot. When tragedy strikes, Mark’s hit-and-run lifestyle takes a backseat to his need to protect the broken girl whose secrets are unraveling. Along the way, both of them will find their truths unmasked. Can they forge a real relationship, or will they give up on their romance as jinxed?


Here’s my review! I loved it.

The Reinvention of Jinx Howell by Nancee Cain
My rating: 5 of 5 stars

This series is full of damaged souls trying to find love, and in the fifth novel, petite blond artist with a horrible family secret, Jinx, makes grieving bartender/accountant, Mark, rethink his two-timing ways. The addict and her codependent lover both reinvent themselves in the Southern setting.

The winding path of Jinx and Mark’s relationship is one step forward, five steps back. At times their misconnections are frustrating, though they are quite realistic. But the depth of feeling and understanding between them keeps them going, leading the reader to cheer for their triumphs.

It was amusing when Jinx’s big dog, Winston, rushes in to save her in the midst of rough sex with Mark. When her tears surprise her afterwards, Mark tells her,

Mark really wants to help Jinx, but saying words like these can’t heal her. Her trust has been shot to hell by a childhood trauma (that she doesn’t fully remember), and in no way does she believe that she is okay.

Nancee Cain’s writing keeps getting better. I loved phrases like The suffocating civility between them was like a blackout shade on the light of their true emotions. Here, Mark muses about the push/pull between him and Jinx:

His mind had kept straying back to the girl with whiskey-colored eyes and a shitload of issues. He’d never met anyone as fucked up as she was, and for some damn reason, he was drawn to her.

He busied himself filling popcorn bowls and setting up the bar. Thinking about work was better than thinking about feelings. And pixies. Work made sense. Feelings and pixies were a mystery.

Not once did Jinx glance toward the bar as she embraced Ava and then Derrick–or rather, they embraced her. She stood ramrod straight, giving Ava an awkward pat on the back. Hell, no wonder he was attracted to her. She was as ill at ease with relationships as he was. It was pure physics. Like attracts like.

Nancee Cain has an in-depth understanding of addiction and recovery, like when formerly suppressed emotions surface once the addictive behaviors stop:

She bit her lip to keep from crying. And hated herself for being so emotional. Not numbing her problems with alcohol had flipped the switch on her inner crybaby. He was going to leave. Not that she could blame him. Her problems were too difficult to deal with, or she herself was . . . Her parents had told her that often enough.

The title of this story reminds me of the Madonna Reinvention Tour, which was so bad that some concert-goers renamed it “The Refund Tour”. You will not want a refund after you buy this book, I’ll tell you! 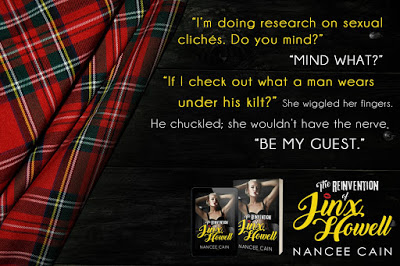 During the day, Nancee works as a counselor/nurse in the field of addiction to support her coffee and reading habit. Nights are spent writing paranormal and contemporary romances with a serrated edge. Authors are her rock stars, and she’s been known to stalk a few for an autograph, but not in a scary, Stephen King way. Her husband swears her To-Be-Read list on her e-reader qualifies her as a certifiable book hoarder. Always looking to try something new, she dreams of being an extra in a Bollywood film, or a tattoo artist. (Her lack of rhythm and artistic ability may put a damper on both of these dreams.)