I’m super excited about this book because it features a psychologist as the heroine! 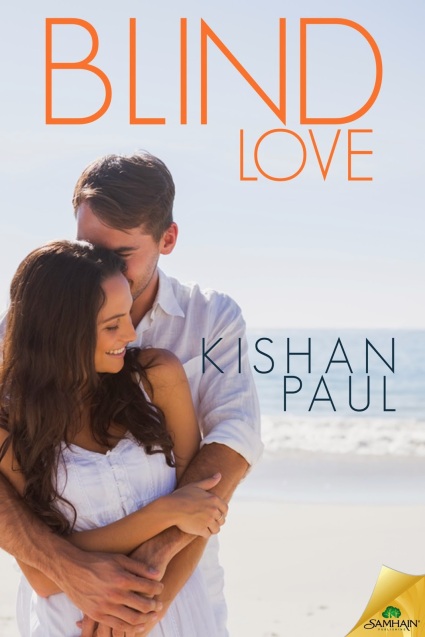 Title: Blind Love
Author: Kishan Paul
Release Date: June 2, 2015
Genre: Contemporary Romance
Publisher: Samhain Publishing
She doesn’t need a hero. But a sexy Marine…that’ll work.
At twenty nine, psychologist Lauren Baxter has a successful counseling practice. Since becoming legally blind at fifteen, her world has been a blurry mess of colors. Her greatest fear is also her ultimate reality. One day that fuzzy realm will forever turn black. Refusing to let blindness define her, she builds a life for herself with her dog, Jack Sparrow, and best friend, Sunny Daye.
Lauren has no tolerance for pity or for Superman swooshing down and rescuing her. She is capable of saving herself just fine. That is until Gabe, the great smelling, former Marine, from Texas moves in next door. Her attraction to him is immediate and, unfortunately for her, mutual.
When Lauren’s ex-husband shows up begging for another chance, she is confused and fragile. She also finds herself in the arms of her secretive neighbor. Little does she realize that her decision for a steamy roll in the hay with Gabe will suck her into his mysterious past, thrust her ex-husband back into her life, put her in the middle of a murder investigation, and place her life in danger.
Gabriel Briggs has the weight of the world on his shoulders. Short term flings are all he can afford for more reasons than one – reasons he never plans to share. Until he moves in next door to the beautiful, green eyed, feisty, Lauren. One night with her and he’s reconsidering promises he made almost a decade ago. When a woman from his past is murdered, his world is turned upside down. Secrets are revealed and innocent lives are threatened. Can Gabe win Lauren’s love and save her life before it’s too late?
Product Warnings: Contains a blind therapist who doesn’t consider herself impaired; a meddling, erotic-novel-writing best friend; a hot ex-Marine with a shady past; and a loyal guide dog that howls “I love you” and is probably the sanest one of the bunch. 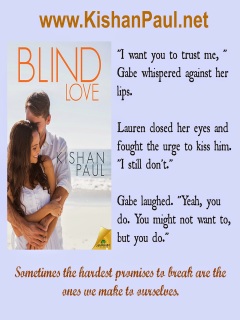 From daring escapes by tough women to chivalrous men swooping in to save the day, the creativity switch to Kishan Paul’s brain is always in the “on” position. If daydreaming stories were a college course, Kish would have graduated with honors.

Mother of two beautiful children, she has been married to her best friend for over seventeen years. With the help of supportive family and friends, she balances her family, a thriving counseling practice, and writing without sinking into insanity.

Her novella, Taking the Plunge, is currently available in the Love Least Expected Anthology on Amazon.

She can be found at: