Today I have the pleasure of welcoming awesome reader friend Mitsy Princell to the blog, to interview creative storyteller Cindy Mezni about book one in her Last Hope series: Shadow’s Dangers. 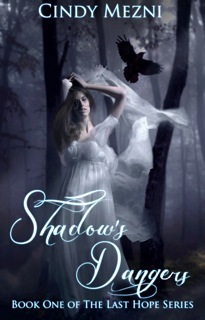 Appearances can be deceiving…

Losing a loved one is never easy. Although Deliah learned to live without her parents when fate took them from her as a young girl, history repeats itself and causes her to face even greater challenges when Tess, the woman who raised her and was like a second mother to her, passes away. But even worse than dealing with her loss is the coinciding arrival of inexplicable nightmares that haunt Deliah’s nights.

She becomes consumed with images she didn’t understand and a recurrent dream about her parents’ car accident. Oddly, this dream details different versions from what she had always been told about the accident.

But when a new family, The Wates, arrive in town and begin to pay close attention to her, even stranger events follow. Now, Deliah must not only face her nightmares, but the possibility that a world she never suspected exists. And this world may cost her everything.

I met Mitsy on Goodreads and she’s a wonderful supporter of authors. Mitsy is super excited about Cindy’s work, and wants to share her love of Shadow’s Dangers with YOU. And onto the interview–take it away, ladies!

Reader Mitsy Princell (MP): How long did it take you to write Shadow’s Dangers?

Author Cindy Mezni (CM): Writing the first draft took me between 3-4 months. It’s modifying and rewriting some scenes and even some chapters that took a lot more time.

MP: Where did you get the idea? It’s so completely different and imaginative.

CM: I’ve always been a fan of paranormal books and I really wanted to write my own but I didn’t want it to be another vampire or werewolf story. And then, one day, I heard about polymorphs and after that, it didn’t take long for me to develop the story of The Last Hope series.

MP: How many books are going to be in the series?

CM: There will be four books in The Last Hope series. Book 2 is written but I still have some changes to do on the story and book 3 is partly written.

MP: When is book two coming out?

CM: There’s no release date yet but as soon as I have one, I’ll post something about it to let everyone know.

MP: On Facebook, your profile is all in French so are you writing your books in both English and French? First author I’ve ever known that could write in both languages. Impressive. 🙂

CM: In fact, my profile is in French – and sometimes in English, even if I had another Facebook page for my English-speaking readers – and yes, I’m writing my books in both languages. Actually, I first write them in French and then, I translate them in English. And thank you for the compliment and for the interview 🙂

Giveaway! Cindy is offering an ebook of Shadow’s Dangers to an international winner. To enter, simply comment on the interview and please include your email address in the comment.