Today I’m stoked to have author Lisette Brodey to the blog. I loved her spunky story Molly Hacker Is Too Picky! And I look forward to reading more from her. First is my review, then an interview.

Molly Hacker Is Too Picky! by Lisette Brodey
My rating: 5 of 5 stars

Molly Hacker is Too Appealing!

As a single woman in a couples world, I was drawn to this novel. But it wasn’t until I cyber-met the lovely Lisette Brodey when she interviewed me at her Author Chateau that I bumped this story to the top of my list. And what a funny, clever story it is.

Molly Hacker is a 32-year-old newspaper reporter whose single status seems to be of great concern to her friends and family. “Just settle down with a husband!” they say. “Stop being too picky!”

But Molly doesn’t want just anyone to be her partner for life. (Smart woman!) She’s looking for a guy who’s cute, interesting, and funny. A guy just like her ex, Leo. Their breakup broke her heart and her trust, and now her mantra is “I must, I must, I must begin to trust.”

I REALLY relate to Molly. She is an independent writer, won’t settle for just any guy, likes Coldplay and Maroon 5, has a hilarious gay BFF and a misbehaving cat, and even wishes she could’ve been a psychologist (my career). However, she’s more neurotic than I am (I hope). And I’m so thankful people don’t get on my case about being single. Poor Molly has to endure meddling friends and family.

When my aunt Pauline asked me why a pretty girl like me couldn’t have brought a man to the wedding who wasn’t attached to someone else, I asked the thrice-divorced sister of my mother to explain to me how settling for three Mr. Wrongs had enhanced her life.

She’s certainly not a shrinking violet! Molly is a lot funnier than me, too. Her insights crack me up, like:

I was feeling like the rock star’s girlfriend. I liked that, but then my lips started forming the word “groupie”, and I didn’t want to be considered one or to fend off their overzealous affection for my man. My man? I needed to regroup. Or did I need to regroupie?

“What does ‘cute as a button’ mean, anyway?” I asked. “I mean, how did buttons ever become the poster children for cuteness?”

But her coworker friend Randy steals the show with his cleverness:

I just stared at Randy, noticing his face had a strange orange glow to it. “And your face is orange because … ?”
“Okay. Self-tanner. Put on too much for too long. Tried to impress. What a mess. I confess. Now I digress. What’s up with you, or should I guess?”
“Give it a rest,” I chimed in…
“I hate men,” I said, glaring at him. “ALL of them.”
“Molly Rose, how irrational. What has gotten into you? Why so blue?”
“If you can be orange, I can be blue!” I said.
“Such colorful banter,” he said.

Ha ha! Then, when invasive socialite Naomi shows up unannounced at Molly’s office, Randy has some fun:

To complicate my ever-complicated life, nothing ever got past Randy, who had taken from his desk drawer a Scream mask (derived from the famous Edvard Munch painting), put it on his face, and proceeded to stand three feet away from the threshold of my office door, mocking every move Naomi made behind her back.

Molly encounters quite a few suitors throughout the story, including a rock star painter, her high school crush (who’s now getting a divorce), an older man who’s wealthy and suave, and an awkward yet endearing man. If she decides to choose one of these men, which one will it be? This mystery match-making element kept me turning the pages.

It’s clear that Molly Hacker is well-deserving of a wonderful man who matches her wit and style.

And now I have the pleasure of interviewing Lisette:

Jennifer Lane (JL): Welcome to the blog, Lisette. As you can see from my review, I loved Molly Hacker Is Too Picky! This was your first foray into chick lit, correct? What made you take the plunge?
Lisette Brodey (LB): Hi, Jen. Thanks so much for having me here today. First, I just want to tell your readers how much I loved the first book in The Conduct Series, With Good Behavior. I’m excited to read the next two. The characters are wonderful, and I’m dying to know what happens to them. Great job!
To answer your question, I really loved writing Molly Hacker Is Too Picky!, but quite honestly, at heart, I’m not a chick lit author. Before it was really viable to be an indie author, I was trying to get an agent for my first two novels, Squalor, New Mexico and Crooked Moon. I came very close many times, but it was frustrating. When I went to bookstores, it seemed to me that many of new books being featured were chick lit /women’s fiction, so I decided I would write one because it seemed to be what the market demanded.
After I wrote 65K words, it became feasible to publish independently, and I put Molly aside and went to work on publishing my first two novels. I then returned to Molly about a year later. It wasn’t easy to reimmerse myself in the nuances of her complicated life, but I did it. I even blogged for a year as the character (www.mollyhackercom).
So, just because chick lit isn’t my chosen genre, it sure as heck didn’t mean I didn’t have a good story to write. My muse introduced me to Molly, and the rest, as they say, is history.
JL: My favorite character is Randy, Molly’s flamboyant coworker. He’s a riot! Have you been blessed with humorous gay friends like Randy in your life? Certainly I’ve met funny heterosexual men, but some of my gay friends constantly make me laugh. What do you think makes him and some gay men so hilarious?
LB: Randy is one of my favorite characters ever. In fact, when I was done writing the book, I really wished I could bring him to life because he’s not only funny, he’s a loyal friend. Yes, I have known many gay men, hilarious and not so hilarious, but Randy is not based on any one person.
Gay men are as diverse as any other “group” of people. Randy, unlike some gay men, never had a problem accepting his sexual preference, nor did he have trouble being comfortable in society as an openly gay man. I believe it is this comfort that gives him the freedom to be hilarious whenever the mood strikes him. But there’s a lot more to him. He’s a caring friend, a compassionate listener, and has relationship insecurities like the rest of us.
JL: I also loved the feline character of Captain Jack. You captured the essence of disdain and mischief possessed by cats. Tell us about your experience with cats.
LB: I’ve had cats since I was 19. The cat I have now is my third. My second cat, Saki, was a very complex creature. I was always sure that she was meant to be mine. Just as I observe human behavior, I observe feline behavior. I’ve never had a cat that has willingly gone to strangers for any kind of attention. Ever. Captain Jack is very protective of his mom, Molly, and he doesn’t let things like good looks and hot bodies get in the way of sussing people out. And he is never shy about letting his feelings be known. I can’t think of any cat that is shy about that.
JL: You recently published a Young Adult paranormal novel Mystical High, the first in The Desert Series. What are your plans for the series? 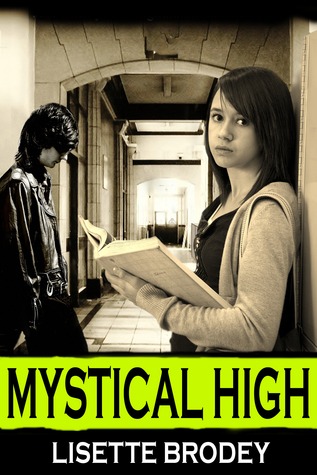 LB: Thanks for asking. Mystical High centers on the lives of two teen girls, Jessie and Jinxsy, who live in a dying desert town in Southern California. Each has very real family problems, and their lives get very complicated when paranormal activity begins to escalate not only at their school, but also in their town, Mystekal.
My favorite character in Mystical High is River, Jessie’s 14-year-old brother. River is very smart, loves to use his extended vocabulary and says pretty much whatever he is thinking. But in other ways, such as in showing his feelings, he is shy and reserved.
In Book 2, River will be a senior, and the book will focus on him and another teen boy, Larsen. Again, the story will concentrate on real-life problems, such as bullying, but there will be new paranormal twists. Although each novel will work as a standalone book, there will be a whole lot in Book 2 that will give shocking insight into the story told in Mystical High. The final book of the trilogy will be the most romantic of the three, and the main character will be a girl readers will meet in Book 2.
JL: You’ve written in other genres too. What’s it like to genre hop? What are some common themes in your novels?
LB: I never really planned to genre hop. It just happened that the stories I wanted to tell all had different labels on them. My novel Crooked Moon is probably the closest to my true identity as a writer.
There are many common themes in my novels. Friendship is a strong theme in every story because I believe that friends are a huge part of most people’s lives. I know they are in mine. They are the family that we choose.
All of my novels have multiple story arcs, and people come together in ways you might not expect. I write this way because I believe that it mirrors real life. Our personal stories are not straight lines. Every one of us has sub-plots. I can’t write a linear story because I don’t see life that way. As we move through life, we meet people whose stories intersect with our own.
The keeping of secrets is another common theme. What you see is not always what is really there, and secrets have a way of coming out, often in explosive ways, and changing (and explaining) a lot.
How to stalk Lisette Brodey:
www.lisettebrodey.comwww.twitter.com/lisettebrodeywww.facebook.com/BrodeyAuthorhttp://www.goodreads.com/author/show/2774659.Lisette_Brodeyhttps://www.amazon.com/author/lisettebrodey