At first I wasn’t that into Young Adult fiction. But releasing my debut adult novel exposed me to goodreads.com and book bloggers, which in turn drew me to the world of YA. The Twilight and Hunger Games series also made me a YA fan. Now I find myself ready to launch my first YA novel, Streamline, in March.

To celebrate, I’m joining over 100 bloggers for the 2012 Young Adult Reading Challenge, hosted by The Eclectic Bookshelf! 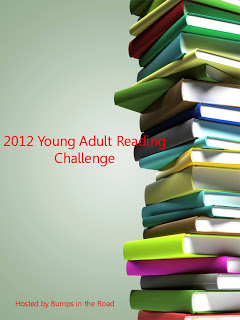 My first YA read of the year is a novel I’ve heard great things about, and the story certainly didn’t disappoint. Here’s my review of Anna and the French Kiss.

What an adorable book! Characterization is so important to my enjoyment of a novel, and I loved these characters. The main character Anna is a 17 year-old whose parents have divorced. Her father writes sappy novels that have become wildly successful, and he decides to uproot Anna from Atlanta to give her the cultural experience of attending a Paris boarding school. Not surprisingly, she hates this idea. Anna has to leave all her friends behind, including the boy at the movie theater she just kissed for the first time, and she doesn’t speak any French to boot.

Anna’s petite frame and snarky tone are typical of YA fiction, but what makes her unique are traits like her infatuation with old movies (she writes a movie review blog in hopes of becoming a critic), the gap between her front teeth, and her love for her younger brother Seany. Here’s one of Anna’s humorous quotes:

”My father is fluent in cliché. Obviously you’ve never read one of his novels.”

Luckily Anna befriends a cool group at the boarding school, including tall jock Meredith, smart, sarcastic Indian Rashmi and her boyfriend Josh (an affable artist), along with eye candy boy Etienne St. Clair. Etienne’s charming and handsome, on the shorter side, with a lovely English accent and perfect mussy hair. Anna calls him St. Clair when they’re friends and Etienne when they’re more than friends. St. Clair has family problems of his own -— a cruel French father and an ill American mother. Anna is infatuated by him:

I’m suddenly distracted by an odd purple-and-red knitted stocking cap walking into the lobby.
“Oh God,” Rashmi says. “St. Clair’s wearing The Hat.”
“Is there a story behind The Hat?” I ask.
“Only that his mother made it for him last winter, and we all agreed it was the most hideous accessory in all of Paris,” Rashmi says.

The group of friends grows to care about each other. Here Anna tries to cheer up St. Clair:

“You have Nutella on your chin,” Rashmi says, pointing with her fork.
“Mmm,” I reply.
“It’s a good look,” Josh says. “Like a little soul patch.”
I dip my finger in the chocolate and paint a mustache. “Better?”
“Maybe if you didn’t just give yourself a Hitler,” Rashmi says.
To my surprise, St. Clair gives a snort. I’m encouraged. I redip and paint one side up in a swirl.

The above exchange reminds me of my best friend Gwynn–we make each other laugh by purposefully smearing food on our faces. We may be 40 years old but we have teenagers’ senses of humor.

The banter between Anna and Etienne is sweet and funny, and I enjoy her teenage voice which comes out most clearly when she speaks IN CAPS.

And then his hand is inside my pocket. My heart spazzes, but he doesn’t notice. He pulls out my passport and flicks it open.
WAIT. WHY DOES HE HAVE MY PASSPORT?
His eyebrows shoot up. I try to snatch it back, but he holds it out of my reach. “Why are your eyes crossed?” He laughs. “Have you had some kind of ocular surgery I don’t know about?”
“Give it back!” Another grab and a miss, and I change tactics and lunge for his coat instead. I snag his passport.
“NO!”
I open it up, and it’s . . . baby St. Clair. “Dude. How old is this picture?”
He slings his passport at me and snatches his back. “I was in middle school”.

The major bummer for Anna is that St. Clair already has a girlfriend. Merde! What should she do?

This novel was humming along at a 5 star rating for me until the last part of the story, when the angst and misunderstandings became a bit too much for my tastes. I think the story could have ended sooner and been a better book. But it’s still a fantastic read. Au revoir!

He's a Michigan Wolverine. She's an Ohio State Buckeye. It's a forbidden romance with balls.
Fun times in Chicago with the family! #niecelove #thebeanchicago #lincolnparkzoo
Hi! Whatcha doin?
I love my job, and the unrelenting mental health demands of the pandemic help me appreciate weekends even more! #happyfriday #therapists Looking forward to trying a new restaurant with @minischnauzertriplets tonight!
Audiobook is live! I’m so obsessed with audiobooks (they kept me going through the pandemic) that I just had to create my own. Talented narrators @lauriecarterrose and @ryanleedunlap bring characters Lauren and Jeremy to life! Http://Amazon.com/Rivals/dp/B08ZVHTCBX #volleyball #football #sportsromance
Available Now! #OSUvolleyball #UMfootball #sportsromance $.99 http://amazon.com/gp/product/B08T7VD3HM “Fun read that captures the best of the greatest sports rivalry in the midst of a smoldering romance.” ~Kevin Kropf